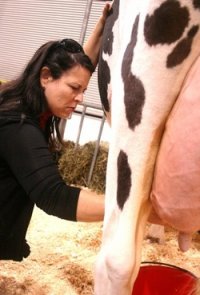 Writer and local food advocate Signe Langford has announced the launch of The Malt Exchange, a new initiative she is spearheading to help craft breweries in Ontario connect with local farmers and supply them with spent grain from brewing to use as animal feed.

The first partnership initiated by the program will see Toronto’s Granite Brewery supplying around 600 kg of spent barley malt per week to Kawartha Ecological Growers (KEG), who will be feeding it to the various animals they raise including cows, pigs, lambs and chickens.

As a way of bringing the project full circle, Ron Keefe of the Granite and Mark Trealout of KEG have also discussed the possibility of serving meat from the animals that are fed the grain in the Granite’s tied house pub.

[This article cross-posted from Canadian Beer News.]
Previous
Next