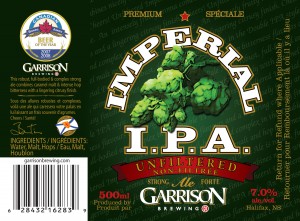 As part of the LCBO’s Autumn Ales beer release, we are thrilled to say that Garrison Imperial I.P.A. from Halifax, Nova Scotia is rolling out to the shelves for purchase.  The Bar Towel, through our partner Cecktor Limited, is the agent for Garrison in Ontario and has been documenting the experience of importing through the Free Our Beer project.  You can find which LCBO stores currently have stock here.

It has been nearly a year in the works to get this beer to LCBO store shelves and we are very happy it is here.  It is truly a fantastic beer, a two-time Canadian Beer of the Year at the Canadian Brewing Awards and one of the most regarded IPAs in Canada.  Recently a few web sites have reviewed Garrison IIPA from the LCBO media tasting a couple of weeks ago, and here’s what they had to say:

OH HELL YES.  Garrison and Propeller are the two “big” microbreweries in Nova Scotia, and are admired and well-respected for good reason.  They make great beers.  Garrison’s IIPA is incredible, golden brown with huge hops in the aroma, grapefruit mostly, and hints of florals.  The flavour is pretty much all hops, though there is a nice malt background, which keeps the hops in balance.  As it warms, there are hints of straw that come through the hops.  In my notes, I used an obscenity to describe how good this beer is.  Just buy it, okay?

And from Taste TO:

Local hopheads have been hoping for some time to see this bitter beauty from Nova Scotia on LCBO shelves. Now that it’s here, they won’t be disappointed, as it’s chock full of the aromas and flavours that hop lovers crave – spruce, pine, grapefruit & herbs – but just enough malt sweetness to keep things from getting too out of hand. It’ll be tempting to stock up on this one, but it’s best enjoyed fresh, while the hops are still really popping.

P.S. as mentioned above, and for full disclosure, The Bar Towel is behind the importing of this beer.  And we can tell you from our dealings with the LCBO that if you want to see more Garrison in Ontario, please buy some.  You can find after the break the complete list of LCBO stores that will be receiving Garrison IIPA (plus the other Autumn Ales releases).