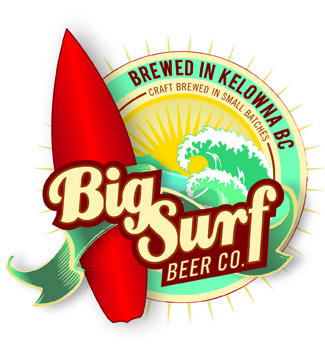 Big Surf Beer Co. has quietly started brewing in Kelowna, BC. The owner is no stranger to the beer industry, having been a national sales manager for Labatt and currently owning two of the most craft-friendly pubs in Kelowna: Doc Willoughby’s and the Old Train Station Public House. Big Surf is launching with a “Laid Back Lager”, which their Austrian brewmaster has crafted using “European hops and the finest Canadian malt”. 6-packs of cans are now available at BC Liquor Stores.

Russell Brewing has released their Märzen just in time for Octoberfest. “At 5.5% alc./vol. this amber-hued Lager has been brewed with Pilsner, Munich and Caramel Vienna Malts and Hallertau Hops”.

Lighthouse Brewing Company has released the 4th edition to their Big Flavour Series: Uncharted Belgian IPA. This 7.5% brew was fermented with two different strains of yeast and showcases Riwaka hops from New Zealand. The Vancouver Beer Blog had a nice interview with brewer Dean Mcleod.

Pacific Western Brewery was established in 1957, and they’re currently celebrating their last 20 years of ownership with a limited edition Schwarzbock. This was crafted by Peter Boettcher, who has brewed in Germany, Switzerland, and now PWB (since 2010).

In celebration of their 10th anniversary, Phillips released a special IPA in a 3L bottle. Here’s some nice coverage from A News. More recently they released their (Twenty-four Mile) Blueberry Pail Ale, and we should see their Crooked Tooth Pumpkin Ale very soon.