Categories: Miscellaneous Beer News, On The Road ReportsPublished On: August 2, 2011 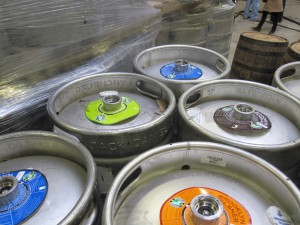 We’ve got a lot of great beers in the province, ranging from domestically produced brews to specialty imports. But they are pretty much exclusively available in bottle or can form (except for Ontario craft beers, that is). You’ll be hard pressed to find the bottled craft beer you love from the United States or elsewhere available on draught, for a number of reasons due to how kegs are handled by our provincial liquor authorities.  The Bar Towel even hosted a well-publicised trip to Buffalo so we could try some of these elusive beers on draught.

But there’s some good news here.  If you want to go to the U.S. and get yourself a keg, you can bring it back with you and serve it at home.  Now how badass would it be to host a party with Stone or Southern Tier on tap?  You can do it yourself – which is pretty awesome as you’ll probably never see it at a bar, at least for the foreseeable future.  You can have a totally unique beer experience in Ontario at your home with rare beers on draught and here’s how.

First things first.  There might be some misperceptions that you can’t bring kegs back over the border.  This is untrue.  As I confirmed with the LCBO, it doesn’t matter what container beer is in when you import it for personal use.  However, you might encounter border services officers who think otherwise, but you can explain that for personal consumption it doesn’t matter if you’re bringing in bottles or a keg.  This is obviously not the case for commercial importing.

Next, you need to know how much you can bring back with you, as kegs are obviously a large volume of alcohol.  Here’s where you need to keep in mind some simple numbers.  If you stay in the U.S. for 48 hours or more, you are entitled to bring back 8.5 litres of beer duty-free.  Here’s where some people might get confused.  This limit is only what is duty-free (i.e. pay no taxes).  But in Ontario, you can bring in up to 45 litres more, if you’re willing to pay the duties and taxes. So if you’re in the States for 48 hours, you can bring back up to 53.5 litres (including the duty-free portion) or 45 litres if you haven’t been for 48 hours.  But since most kegs are 30 litres, you’re in the clear either way.

When you get to the border with your keg(s), always declare.  It’s not worth the risk to smuggle.  Be prepared to explain what you have, as the border services agent will likely not have encountered too many folks doing what you’re doing.  They might ask you to tell them how much you have in case equivalents (30 litre keg = approximately 3.5 cases).  But you’re likely going to have to pay duty as you have a significant amount (a 30 litre keg would be multiple times over your duty-free limit).  If you get waved through, awesome.

On to the duty and taxes.  Presently it’s actually pretty simple what you will pay.  There’s three components: Duty, HST and a Provincial Mark-Up. Most of the time your beer will be classified with the code “2203.00.00.31“, which is beer that exceeds 2.5% alcohol but less than 11.9%.  For this, there will be a Duty charge of $31.22 per hectolitre (or $0.3122 per litre).  This will be charged on the quantity of beer, not the value.  Now this is the default duty, for breweries that produce 75,000 hectolitres or more annually.  According to the LCBO, if you’re bringing back beer from a brewery that produces less (and you can prove it), they will qualify for a lesser duty.  But it’s up to you if you want to do that research for the duty difference.  And depending on if you’ve been in the States for more than 48 hours, the duty could be calculated on just the duty-free difference (in other words, duty charged on 21.5 litres only on a 30 litre keg (30 minus 8.5).

Next up is HST.  Pretty simple in Ontario, it’s 13% of the Canadian dollar value (not the U.S. price).  This is a boon to us when our dollar is high as the value is equivalent or less in Canadian dollars and therefore we pay less tax.  This amount is calculated on the value plus the Duty addition from above.  Now here’s where the math starts to get possibly a bit more complex – if you’ve been in the States for 48 hours and you have a 30 litre keg, you can reduce the value by 8.5 litres which is your duty-free allowance.  But you’ll need to bring a calculator to figure that out.  It could save you a couple bucks if you want.

Lastly there’s the Provincial Mark-Up.  In Ontario, this is 67.6 cents per litre on the total quantity you have.  Again, this could be calculated on just the duty-free difference if you’ve been in the States for more than 48 hours.

That’s basically it.  Add up those three components and that’s what you’ll pay.  In my experience the duty and taxes generally work out to 30-40% of the price.  I just brought back three kegs valued at about $140 CDN each (30 litres) and the taxes and duty was $47 each, or about 33%.  For something totally unique, I think it’s a fair premium.

A couple other notes: make sure to keep your receipts so you can show the border services agents and be sure to include bottles or any other alcohol in your totals. And think about the breweries – if you get custom kegs you probably paid a deposit that is less than what they paid for the keg itself.  They would probably appreciate them back if possible.  And just a caveat: the information in this post is current as of right now, with the facts that I’ve been able to research, for importing into Ontario only.  There is very little specifically about beer importation online, so it may change at any moment.  Oh, and you can only legally consume the beer privately – it can not be sold or served at a bar.

You’ll probably want to do some research before you go to the U.S. to find the keg(s) you’re looking for.  Since it’s a lot of private retail, you should contact either the brewery or distributor of what you’re looking for, or retailers to see if they can get what you want.  It’s a real treat to have a keg at home of great U.S. beer, so enjoy!