A limited number of cases of St-Ambroise Russian Imperi 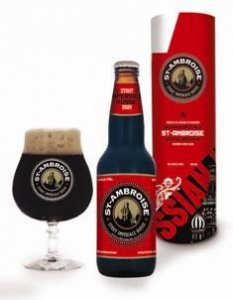 al Stout have begun to filter into LCBO store. This is the first attempt by the Montreal-based brewery at an imperial stout – an effort which is long overdue considering the plaudits they have received for their St-Ambroise Oatmeal Stout. McAuslan’s description of their beer states:

Serve St-Ambroise Russian Imperial Stout between 13°C and 15°C, preferably in a port glass or a brandy snifter. This stout will improve with age for a number of years. Store in a cool, dark place.”

This offering has received considerable praise on both Beer Advocate and Ratebeer, and has become one of the highest rated beers in Canada. Only 9,600 bottles were produced, and the LCBO is selling their allotment at $5.95 while supplies last.