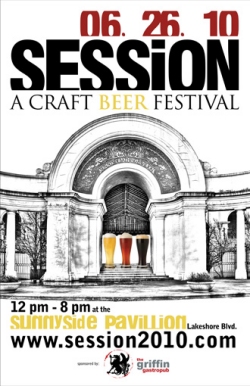 As part of Ontario Craft Beer Week, Jed Corbeil and Curt Dunlop of The Griffin Gastropub in Bracebridge will be presenting Session: A Craft Beer Festival on Saturday, June 26th from 12 noon to 8:00 PM at Sunnyside Pavilion in Toronto.

Session will feature breweries from Ontario and elsewhere in Canada including:

The festival will also feature food from local restaurants and artisans, as well as live entertainment. For more details, including ticket information, visit the Session website.