Following last year’s LCBO Brewery Features of Dieu du Ciel! and Harviestoun, the first feature of 2011 is about to hit the shelves.  Nørrebro Bryghus, the acclaimed brewery from Copenhagen, Denmark, will see five of their beers released in 25 LCBO stores starting the first week of February. 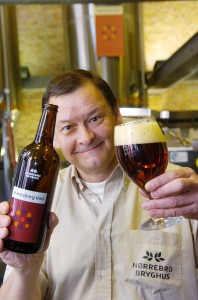 Danish beers have been growing in popularity over the last few years – in 2009 beerbistro hosted a memorable Danish beer dinner featuring Nørrebro and Mikkeller, with Anders Kissmeyer of Nørrebro (pictured on the right) in attendance.  These breweries have been at the forefront of a Danish craft beer movement featuring bold and interesting products, and now Ontario beer drinkers can try some for themselves.

The Brewery Feature program is a quarterly initiative of the LCBO to highlight a specific brewery in a limited number of stores.  The stores that the Nørrebro will be available at are listed after the jump.  You can discuss this feature and other beery topics in our Discussion Forum.

The following LCBO stores will have the feature: