IPA on the West Coast 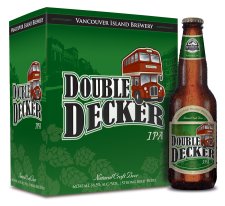 Vancouver Island Brewery has been producing natural, unpasteurized beer since 1984. Now this is the west coast…
SO IT’S ABOUT TIME THEY CRAFTED AN IPA!!!

Their 6.5% Double Decker IPA will have the malt character of a British-style IPA, complemented by Cascade hops from the Pacific Northwest. The best of Britain and America… isn’t that what Canada is all about?

This will be released in early February and join the staggering line-up of IPAs that are regularly available at the government BC Liquor Stores. Here’s my brief descriptions:

And that doesn’t include the limited releases, fresh-hopped ales, Cascadian Dark Ales, Double IPAs or any of the brewpub offerings!