Categories: Beer Events, On The Road ReportsPublished On: April 6, 2015

The Bar Towel is proud to once again present our annual preview of the Craft Brewers Conference and BrewExpo America (CBC), taking place from April 14th to 17th, 2015 in at the Oregon Convention Center in Portland, Oregon. Part One of the preview covers our highlights of breweries, bars and other sights of the city, and Part Two covers our picks for the conference seminars.

Portland is a city that you want your city to be like. It’s a city where you envy the things that they do and wish it happened where you live. In Toronto, where food trucks and carts have a persistent struggle for their very existence, Portland has literally hundreds of food carts thriving throughout its neighbourhoods. In a time where everything in life is getting more expensive, Portland has no sales tax. And in cities across North America where small brewing is booming, Portland has been on that for years, with over 50 breweries within the city limits, more than anywhere else in the world.

Welcome to The Bar Towel’s annual Craft Brewers Conference (CBC) preview, this year taking place in Portland, Oregon. Since the Brewers Association (organizer of the CBC) announced Portland as the location of the 2015 conference, the dates have been circled in bright red on the calendars of those across the brewing industry.  Portland is truly a paradise for fans of small brewing and one of the top destinations for beer in the United States.

As with every CBC, the conference is just as much a way to explore the destination city as it is to take in the conference programming, and we wholeheartedly recommend doing both.  Portland is a walkable, discovery friendly city and you’ll enjoy your CBC experience even more by taking some time to check it out. (See our past previews of Denver, Washington DC, San Diego and San Francisco if you’re interested.)

“Local” and “craft” aren’t clichés in Portland, they are part of its DNA. Portland is a city of local food, coffee, beer – just about everything that you’d want to put in your body Portland takes immense pride in. In this Part One of our CBC preview, we’ll outline some of the beer and brewing spots that you might want to check out while in Portland, and Part Two will cover our seminar picks for the conference itself. 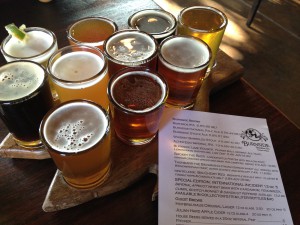 Just one of many sampler trays one can enjoy in Portland.

From a beer standpoint, Portland’s options are staggering.  With over 50 breweries in the city, there are dozens of options to suit all beer tastes, and many of which have large taprooms to enjoy their beer onsite. With all this brewing diversity comes an incredible variety of beer available, and there are numerous beer bars reflecting this selection. And as it is the CBC and the brewing industry is in town, many breweries and beer bars are hosting special events throughout the week. There’s no way to do justice to all the places worth checking out, so here are a few highlights of places and events for your to-drink list:

Bailey’s Taproom: This is a fantastic beer bar located in downtown Portland with wide range of ever rotating beers. Their event space The Upper Lip is hosting some brewery features during CBC week, including Founders on April 14th, Stone, Blue Star and Block 15 on April 15th, and The Bruery and the Ale Apothecary on April 16th. While you’re there dash across the alley for a quick pint at the tiny brewpub Tugboat.

Deschutes / Fat Head’s / Rogue: You’re probably familiar with these famous breweries, all of whom have their home bases elsewhere, but each have Portland outposts where local brewing takes place. On the special event front, Deschutes is hosting a beer and steampunk night entitled Beer Machines at Pure Space on April 16th.  Rogue’s Green Dragon brewpub is hosting the Beergasm festival on April 16th, with over 15 breweries participating.

Hair of the Dog / Upright Brewing: Toronto beer fans will know that these Portland brewers have made appearances locally in the past through private orders, so this is your chance to enjoy them at the source.  Upright’s Engelberg Pilsner recently was crowned the 2015 Beer of the Year by Willamette Week. 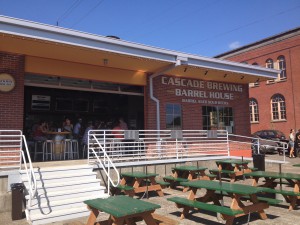 Cascade Brewing: This will undoubtedly be one of the hot spots during the CBC. Cascade is a pioneer in sour and barrel aged beers, and their brews are highly sought by beer lovers across North America. Cascade has a tasting room at their brewery, but for CBC week is simultaneously hosting a Sour and Wild Invitational on the production side of the brewery from April 14th-18th, pouring a rotating range of beers from different breweries across the U.S., and vintage editions of their own beers. Get here early as its going to be busy.

Gigantic Brewing: A name who may only be recently familiar to Ontario beer drinkers, as Gigantic recently teamed up with Beau’s All-Natural to release the collaboration beer La Formidable through Beau’s B-Side Brewing. Gigantic’s unique partnership with Canada continues this week as they are part of a punk rock night on April 16th alongside Beau’s, Quebec’s Trou du Diable and Cider Riot at the Star Theater.

BridgePort / Widmer: Grandfathers of the Portland beer scene, both BridgePort and Widmer have been brewing in the city since 1984 and still making great products. 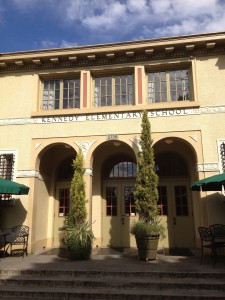 Go back to school, but with beer this time.

McMenamin’s Kennedy School: A one-of-a-kind experience, this is a hotel, brewery, movie theater and more built into an old elementary school. It is a bit of a ways from downtown, but if you have some time it’s worth it to see how old buildings can be re-purposed into something amazing. They’re hosting a tasting of a new limited edition beer called Golden Lion of Flanders on the 16th. Just a block away is the multi-tap Concordia Ale House to add another spot to the trip there.

Hopworks Urban Brewery: Eco-friendly brewery family, with their main brewpub and offshoot BikeBar featuring a wide range of beers available at both locations.

Burnside Brewing: Spacious, attractive Burnside Brewing is located quite close to the Convention Center, so likely will be a hub of activity during the week.  They’ve got a Three Creeks collaboration party happening on April 16th.

Breakside Brewing: Winner of Willamette Week’s Brewery of the Year, Breakside has a restaurant and pub brewery located in NE Portland, and a brewery and taproom located in suburban Milwaukie.  Breakside is participating in a collaboration night with Stone on April 16th at the White Owl Social Club.

The Commons Brewery: Taproom and brewery which just moved into its new location in SE Portland in March. Along the same general stretch as Hair of the Dog, Cascade and Green Dragon so makes for a nice little crawl.

The Hop & Vine: Taproom and bottle shop located in North Portland has a lineup of great events planned for CBC week, including special tappings of Fremont, Bell’s, Melvin, Comrade and Crooked Stave on the 15th; an Allagash, Crooked Stave and Crux event on the 16th; a triple collaboration release night with Trois Dames (Switzerland), Jester King and Crooked Stave on the 17th; and a ‘Sour Sunrise’ brunch to finish things off on Saturday morning the 18th, featuring Sante Adairius, the Rare Barrel and Almanac.

Lucky Labrador Brewing: 20-year-old pooch-themed brewing family with three locations in Portland and another in neighbouring Multnomah. Check out the spacious original location on SE Hawthorne.

10 Barrel Portland Pub: Bend, Oregon brewer 10 Barrel opened up a brand-new Portland pub located downtown on NW Flanders Street just a couple of weeks ago. However, you won’t see 10 Barrel at the CBC itself, due to it being acquired last fall by Anheuser-Busch. Willamette Week is cautiously optimistic that good beer will remain (also see Goose Island), it’s so worth checking this new spot out.

Horse Brass Pub: No Portland beer list would be complete without the legendary, pioneering craft beer bar which has been going strong since the late 70s. They’ve got a number of special brewer guest nights during CBC including Deschutes, Lagunitas and Point Blank.

The beer scene in Portland is so expansive that we just can’t list everything here. I’d strongly recommend that you give a close read to Willamette Week‘s recent Beer Guide, a  comprehensive and detailed view of the city and area beer scene. Included in their guide are their favourite beers, beer bars, breweries and more. Print it out and read it all on the flight to Portland, you won’t be disappointed. And for even more events to peruse, check out this comprehensive lineup tracked by the CBC.

Portland is substantially about beer, but definitely not solely about beer. It is also a city of personalities: if you have time, grab a copy of Chuck Palahniuk’s Fugitives and Refugees, where he recounts some of the things that makes Portland so unique. It’s a great way to get a feel for the fabric of city before you arrive.

The neighbourhoods of Portland and eminently explorable and walkable, so take a minute to familiarize yourself with the city’s main districts. Mississippi/Williams has a great stretch of food, drink and unique shops to poke your head into. The Alberta Arts District edges onto where the aforementioned Kennedy School is located, so worth a walk through on the way to this most unique destination. 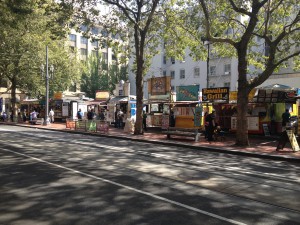 Just one of the many streets lined with food carts in Portland.

Of course there will be times where some food will help with all the great beer consumption, so be sure to check out Por Que No?, Mississippi Pizza and Bunk Sandwiches for some delicious eats, and then lineup at the famous Voodoo Doughnut for dessert. When you need to sober up in the morning, hit up the famous Stumptown Coffee for a pick-me-up.  And do yourself a favour and visit some of Portland’s many food carts, and dream of what it could be like in Toronto.

Portland has also got all kinds of other unique things to check out, if you need a break from the brew. Expand your literary prowess at Powell’s City of Books, a massive independent bookstore that takes up an entire city block. If you’re in town over the weekend, check out the Portland Saturday Market, and take in some views on the Aerial Tram that rises above the city.  Portland’s also known for their roses, so when you need to dry out take a walk through the International Rose Test Garden.

Portland is a walkable city, so it will be easy to get around the downtown and convention center areas on foot. Strangely, there is no city bike sharing system in Portland, but they do have a comprehensive light rail system to get out to other areas of the city. Uber is also in Portland, as are the car-sharing services Zipcar and Car2Go (but don’t drink and drive!) 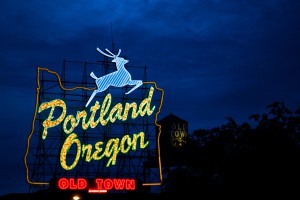 Portland is truly a memorable city, for beer and its culture overall. It has been a hotly anticipated destination for the CBC over the past few years, and all signs point to the brewers and bars in the city really stepping up to make it a memorable week. All the locations mentioned in this preview (and others) are pinned below in our CBC map of Portland, and we’ll continue to add spots as we approach the start of the conference. Follow us on Twitter for real-time updates on what’s happening at CBC, and join the conversation in our Discussion Forum. We hope to see you at the CBC, and stay tuned for Part Two of our preview, where we’ll go through our seminar picks for the conference!