Crack into a Homebrew in Baltimore

Categories: Beer Events, Feature, On The Road ReportsPublished On: June 8, 2016

The Bar Towel is proud to present our annual preview of the American Homebrewers Association (AHA) National Homebrewers Conference, now known as Homebrew Con, taking place from June 9th to 11th, 2016 in Baltimore, Maryland. This article will cover highlights of the conference as well as recommended beer destinations in Baltimore. The photo above is courtesy Visit Baltimore.

Baltimore is a city that you’re probably quite familiar with, but perhaps one you don’t know a great detail about.  You surely know it as a port city, located on the east coast of the U.S., a harbour town on the Patapsco River, which connects to the Chesapeake Bay and onto the Atlantic Ocean.  You likely know that people here love Maryland Blue Crabs from those waters, amongst other great foods, from both sea and land.  You probably know that the famous show The Wire was set in Baltimore, and potentially that the equally famous film The Silence of the Lambs was too.  You likely know a bit about Baltimore’s sports history, such as being the hometown of baseball legend Babe Ruth, the career home team for Hall of Famer and Toronto Blue Jay nemesis Cal Ripken, or the only U.S. city to win the CFL’s Grey Cup.  You might know about its famous residents including writer Edgar Allan Poe or filmmaker John Waters.  And you possibly know that the Star Spangled Banner flag was created here (in a brewery no less), and that the anthem was written here thanks to inspiration from the aforementioned flag.

While you’re most certainly familiar with these interesting facts about Baltimore, something you might not be familiar with is the city’s beer scene.  But for homebrewers in North America, that’s about to change. 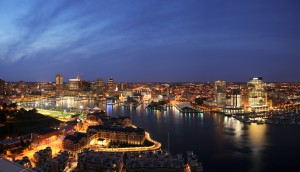 The Homebrew Con returns to Baltimore for the first time since 2005 (it also hosted in 1995), but demonstrating the growth of the conference, it is being held this year at the Baltimore Convention Center versus at a hotel like previous years in other cities.  But similar to previous years, the conference is acts not only gathering of homebrewers, but a showcase for a local beer scene.  Although Baltimore may not spring to mind as one of the top beer cities in the U.S., the Homebrew Con does a nice job of showcasing some of the smaller markets in the country, as in recent years Bellevue, Washington, Cincinnati, Ohio and Grand Rapids, Michigan amongst others have played host.

Let’s start with the conference and then we’ll talk about the beer scene in Baltimore.  The conference itself is comprised of education, competition and sociability.  There is the National Homebrew Competition, a large scale event whereby the finalists are judged at the conference, and announced during the Grand Banquet and Awards Ceremony to close out the weekend.  Informative seminars line each day of the conference, hosted by both amateur and professional brewers alike.  Throughout each day there is the Homebrew Expo and Social Club, a trade show of sorts for brewing equipment and other homebrew gear and gadgets, paired with numerous beers from across the country.  And then there’s the evening events, including a professional brewer festival and Club Night, a homebrew gathering, drink-up and immersive beer entertainment experience that needs to be seen to be believed.

One of the most unique aspects of the Homebrew Con (at least to those familiar with the rigid rules of Ontario), is the presence of homebrew beer at the conference.  So not only can an attendee of Homebrew Con imbibe in the beers of the local professional brewers (and beyond), they can sample the efforts of fellow amateur brewers.  This gives the conference a true air of authenticity and celebration, as you can stand side-by-side with brewers from all levels of beer experience and enjoy some delicious concoctions.

I truly recommend everything at the Homebrew Con – if you’re a fan of beer and brewing you can’t go wrong with anything that’s happening.  But there’s a lot of seminars that take place during the conference, and it’s impossible to see everything.  So, herewith are my picks for the seminars of the conference worth checking out, ones that I find particularly interesting, and you might too.

Baltimore has a lot of neighbourhoods. Over 200 of them.  With a neighbourhood culture like Baltimore’s it’s worth doing some exploring, so let’s talk about some of the good beer places that you can take in some local flavour outside of the conference (see at the end of this article a map of all the spots referred to to help you navigate around). 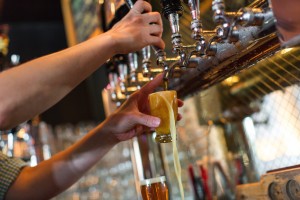 The Homebrew Con itself is at the Baltimore Convention Center, which is right in the heart of the city, in the Inner Harbor and close to the waterfront.  Kitty-corner to the convention center is the Pratt Street Ale House, featuring house beers from Oliver Brewing (the longest running brewpub in Baltimore) alongside about a half-dozen guest taps.  For baseball and beer fans, nearby is Dempsey’s Brew Pub, named after the famous catcher of the Baltimore Orioles.  And just up on N Eataw St lies Alewife Baltimore, an impressive spot with nearly 40 craft beers on tap.

To the south of downtown is Federal Hill, where folks  of days past watched the bombs bursting in air.  You can find bars bursting with beer here, such as the dozen house-brewed beers and pizza at Pub Dog, and 20 draughts from the local region and beyond at tavern Brewer’s Cask.

Around the harbor leads to the historic, waterfront neighbourhood Fell’s Point, and the long-standing Baltimore beer institution Max’s Taphouse.  Max’s was here before everyone else (or so it seems to an outsider), and they still top them all.  With over 100 taps available, Max’s has a beast of a beer menu, and one hell of a draught lineup to celebrate the homebrewers this week.  Undoubtedly and deservedly so, Max’s will be a hotspot for Hawaiian shirt wearing homebrewers in the days to come.  Also worth checking out closeby is the well-known Heavy Seas Alehouse, featuring a wide range of house brewed beers.

A bit farther east in formerly-blue-collar-turned-condo neighbourhood of Canton is Of Love and Regret, a pub with 25 taps and the home of Stillwater Artisanal Ales.  Find a great collection of Stillwater and some other goodies here.  Nearby you could also check out the Baltimore Taphouse with about a dozen or so craft taps, and Mahaffey’s Pub with over 20 taps and a good skew towards local brews. 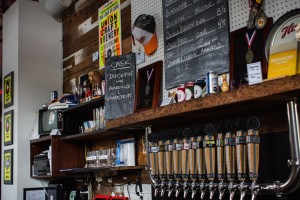 Head north through Mount Vernon and check out The Brewer’s Art, a brewpub with a large rotating selection of house-made beers, and onward further north and a bit west to the neighbourhoods of Hampden (hipsters!), Roosevelt Park and Woodberry for a cluster of interesting spots.  If you like reading while you drink, the indie Atomic Books has Eightbar in the back with craft beer available. Birroteca Baltimore focuses on pizza and craft beer, with 20+ taps available with good local representation. For some local brewery taproom action, check out Waverly Brewing with around eight brews going, and Union Craft Brewing with a range of their diverse lineup available.

The Homebrew Con is always a good time. I tell people that it’s the best money they will ever spend on a beer event, in part due to the sheer amount of styles, tastes and sampling that one can do at it.  But it’s also just a great down-to-earth celebration of beer, by some of the most passionate beer folks out there.  It’s friendly, often a little bit crazy, sometimes inappropriate, but always enjoyable.  Connect with us on Twitter and let’s have a homebrew this week!