Categories: British Columbia, On The Road ReportsPublished On: September 11, 2011 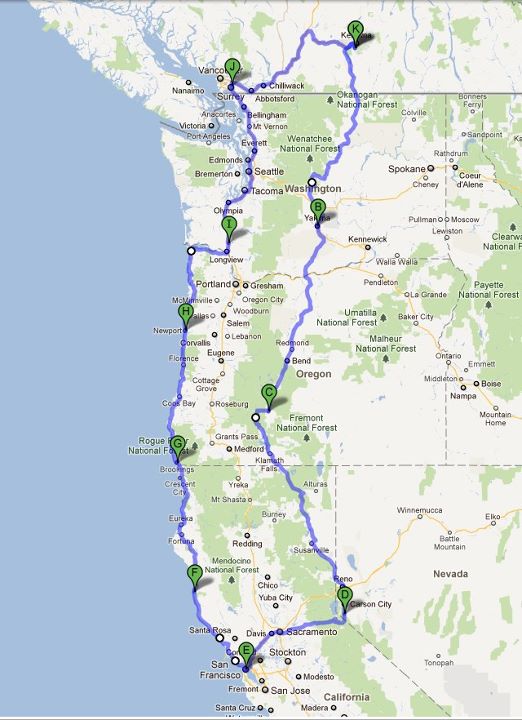 I really love BC and the beer that’s brewed here. The private liquor stores have really benefited the small brewers and the general public seems to be more aware of the local craft brewers. Although BC is ahead of Ontario, craft beer is still a bit of a sub-culture, and we even suffer from a few archaic laws. Restaurants couldn’t actually serve draft beer until the mid 1980’s (a pub license was required). We owe a lot to Granville Island Brewing for fighting that legislation. Yet even today, many establishments don’t choose a food-primary license. This excludes minors (along with their family) from pubs, while many ‘fine’ restaurants still serve macro swill alongside their finer wines.

Across the boarder it’s a bit different. Here’s my report from our family road trip:

Our first stop for lunch was in the little town of Omak, which has a population of less than 5000. The Breadline Cafe had half a dozen craft brews on-tap, and even did growlers fills! I enjoyed a Methow Valley Porter and Alpine Marzen.

In the afternoon we weaved in and out of pine trees and sage brush until we came to our destination for the night: Yakima Washington. The irrigated valley along the river was a stark contrast to the surrounding desert. This is where you’ll find 75% of America’s hop acreage. My 3 year old was getting a little restless, so we went to a simple family restaurant: Applebees. Once again, I found a number of craft brews on tap and enjoyed a Yakima IPA (on the way back I had a Ninkasi IPA at another Applebees). It’s really nice to see that even the big chains support their locals.

As we continued south, we could see the occasional snow-covered volcano (pic) of the Cascade range in the distance. We made a stop in Bend at the Newport Market to pick up some supplies (bottles). Their beer selection was amazing for a grocery store, and they were offering samples of Life & Limb along with a few other local brews. We had dinner across the street at Kebaba. This Lebanese restaurant had a beautiful garden patio, a change table for babies and maybe a dozen different bottles of craft brews. They even had a rotating tap for something interesting, which happened be the Double Mountain Vapourizer, which I thoroughly enjoyed.

The next day we circled around Crater Lake (pic), which is a volcano that erupted 7000 years ago and has been filling with rain water ever since. Then we headed down to Lake Tahoe and then over to San Francisco. I had a few bottles in the evenings and replenished my stock at the SoMa Whole Foods in San Francisco (399 4th Street). I made a quick stop at Anchor Brewing, as they’re currently booking their tours 6 months in advance, but I hoped to grab a glass (I was getting tired of the hotel plastic cups and also wanted a keepsake). As I’m sure many of you know, Fritz Maytag saved this company when all the other little brewers were closing down, which was a pivotal point for American craft beer. Unfortunately, they were busy with a tour and while I probably could have sampled some free beer, it wasn’t possible to get my glass. But we went on to Moylans for lunch and I was able to get my hands on a real glass there.

We traveled up the coast along the old Highway #1. We missed a lot of the big brewers along the interstate (beer map), but it was a heck of a drive. We spent the night in Fort Bragg and had a nice dinner at
North Coast Brewing. The next day we drove through the California Redwoods (quite literally) and made a stop for the night in Brookings, Oregon. At the Art Alley Grille I enjoyed a bottle of Sierra Nevada Pale Ale along with a marionberry chipotle salmon, which was the gastronomic highlight of the trip.

Then we headed up to Newport and had dinner at Rogue (Brewer’s on the Bay which is the production brewery, not the original brewpub). I sampled a few of their rare treats and my daughter was delighted to have her kids meal served in a Frisbee! We liked Newport, and at this point we really just wanted to settle in for a couple of days, but we had to move on. We hit the Pelican Brewery for lunch and watched some surfing, then headed up to the Mount St. Helens National Volcanic Monument (pic) before heading back to Canada.

It was quite a bit of driving (over 4600 km), so having a quality pint at a family friendly restaurant was REALLY appreciated. Anchor and Sierra Nevada gave the Americans a good start, but I’m still not sure how craft beer has become so much more commonplace. Is it simply the regulations?