Can a new beer be kept a secret? 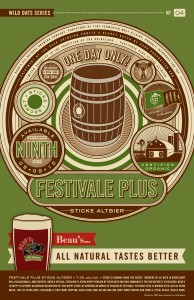 That’s the question, but when it’s Beau’s brewery behind it, a secret will not last long.  Tomorrow, September 9th, Beau’s is releasing a special version of their Festivale, an ultra-limited edition called Festivale Plus.  Inspired by Dusseldorf brewers “sticke” or secret brews, Beau’s announced this only today with the intention of selling through the stock as quickly as possible.  Growlers will be available at the brewery and on tap at the following Ontario pubs:

Well done Beau’s for continued efforts to do interesting things in the Ontario brewing scene.  Get some Festivale Plus while you can!