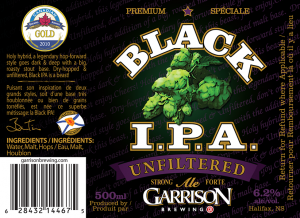 The Burger Bar, a relative newcomer to the Toronto beer scene but a spot that has quickly shown its dedication to craft beer, is now offering a limited amount of two beers from Garrison Brewing of Halifax, Nova Scotia.  Available in bottle are both the award-winning Black I.P.A. and Hop Yard Pale Ale.  The Black I.P.A. is a dark and hoppy brew, which won, in its debut year, the Gold in the Imperial Stout category at the 2010 Canadian Brewing Awards.  Also available is Hop Yard Pale Ale, a West Coast style pale ale, which also took home a Silver in the North American Style Pale Ale (Bitter) category at the ’10 CBAs.

This is the first time that Garrison is available since their Imperial I.P.A. was released as part of the LCBO’s Autumn Ale release last fall. Garrison is represented in Ontario by The Bar Towel.  The Burger Bar is located at 319 Augusta Avenue right in the heart of Kensington Market in Toronto.