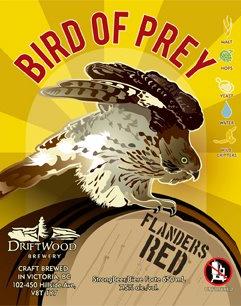 The Driftwood Brewery has just released the first of their Bird of Prey Wild Ale Series. This Flanders Red “spent a year conditioning in a mix of American & French oak wine barrels. Tart & funky, this beer can be aged for a very long time, but will be enjoyed now!”

The Anceint Forest Alliance was selected as Phillips Benefit Brew for 2011. Some of our old growth forests are truly remarkable {pics}, and this worthy organization will be receiving the proceeds from the Phillips Ancient Brown Ale. So drink up! Phillips is also introducing a Root Beer Style Ale called Old Sarsaparilla, as well as their Mash-up Baltic Porter, which they brewed in collaboration with Garrison Brewing (after doing the Belgian IPA on the East coast).

Christmas is coming and there’s a few seasonals back on the shelf. Look for Dead Frog’s Christmas Beeracle and Tree Brewing’s Spiced Reserve Ale.

If spices aren’t your thing, R&B Brewing has their Auld Nick Winter Ale. This unadulterated Scottish Wee Heavy weighs in at 6.5% abv, with a restrained 18 IBU from the East Kent Golding hops. It took home a gold at the 2011 BC Beer Awards, besting the excellent Cannery Squire and Russell Wee Angry Scotch ales.