Bar Towel On The Road: Vermont

Categories: On The Road ReportsPublished On: January 10, 2013

The Bar Towel is happy to bring back a classic feature, “On The Road” reports, detailing (non-comprehensive) beer experiences from destinations outside of Ontario.  In this article: a recent excursion to central Vermont, including Burlington, Waterbury and Montpelier. 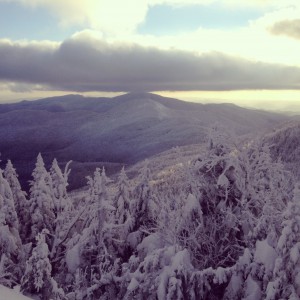 View from the top of the Stowe ski area.

It was quite amazing that through all my travels I had not yet made it to Vermont.  It’s only a state and a province away, shares a border with Canada yet it seems far away.  But luckily, at the end of December 2012 and early January 2013 I was finally able to make my first trip to the Green Mountain State.  And I am sure happy I did.

Vermont is truly is a unique place, a state that feels unlike anywhere else in the U.S.  It’s as if the wide-spread commercialism that has permeated our culture hasn’t arrived there yet.  It’s friendly, quaint, pretty, honest, and remarkable in how much good beer is there considering the state’s small population size (ranked 49th out of 50).

The trip began in Burlington, the largest city and a direct flight from Toronto thanks to a seasonal service from Porter Airlines (the only international flight to the city!).  It is a very pretty small city, with the University of Vermont close to downtown and a nice pedestrian-only commercial street right in the heart of town. There are three well-known beer spots here: American Flatbread, Farmhouse Tap & Grill and the Vermont Pub & Brewery.

The Vermont Pub & Brewery (144 College Street) is the oldest in the state, founded by Greg Noonan and there is a lot of history of the place and the man (who sadly passed away a couple of years ago) still evident in the pub. It’s a mix of sports bar, pub and restaurant all rolled into one, with visible beer tanks in the restaurant. They have about 10 house beers on tap plus a couple of casks, with a wide range of popular styles including Helles, Bitter, IPA and Stout, plus a couple of unique ones including a Brett sour and raspberry. 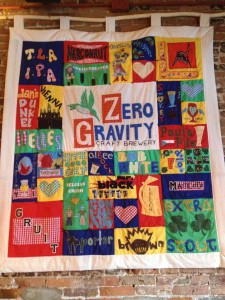 Another brewpub in town is American Flatbread (sub-name Burlington Hearth, 115 Saint Paul Street) and the Zero Gravity brewery which is at the back of the restaurant. It’s a very cozy place, with two sides – one a fireplace bar with tables, and a classic pizza restaurant with checkered red tablecloths and a large pizza oven. They’ve got a very diverse range of interesting beers, including a gruit, black IPA, schwarzbier, tripel, Belgian wheat and others. The pizzas out of the wood-fired oven are fantastic and a great complement to the beer.

The third in the Burlington ‘beer trinity’ is Farmhouse Tap & Grill (160 Bank Street), a super popular restaurant and beer bar. The upstairs is a sit down restaurant with a small bar and the downstairs is a dark, intimate and cozy bar room with a warm fireplace. They have many interesting craft beers on offer, including locals Hill Farmstead & Lawson’s Finest Liquids, but also beers from across the U.S and the world, including Brooklyn, Dogfish, Lagunitas, Ballast Point, Sixpoint and Baird. The bar manager of the Farmhouse (Jeff Baker) also writes a beer column for the local daily paper and they frequently have beer events. The Farmhouse has excellent food but you could be waiting a while for a table on a popular night.

Some other spots I was able to hit were Farmhouse’s sister restaurant El Cortijo (189 Bank Street), a Mexican restaurant uniquely set within a diner. It’s a cool, popular spot and a few locals on tap including Hill Farmstead, Trapp and Smuttynose. Another place we dropped in on was called Ken’s Pizza/The Pub (71 Church Street) which is a good holding pen as you wait for a table at the Farmhouse (reminiscent of Rhino’s relationship to Grand Electric). There’s a number of  other popular bars along the pedestrian strip if you’re there and need some more options.  There are lots in Burlington.

Everything is compact in downtown Burlington and there are a number of hotels within walking distance of the ‘beer trinity’ of bars. There’s also a number of hotels around the interstate, but less accessible from there to the downtown zone and I didn’t notice a lot of cabs, but it might have been due to it being New Year’s.

Moving on from Burlington after New Year’s, the remainder of the week was spent in Waterbury – and this town is quite something. For a population of about 5,000, the good beer options are staggering.  At the central intersection of Stowe & Main, you can find three top-notch beer bars all across from one another and multiple nights can be spent pinball-ing from one to another, downing great beers at every stop. 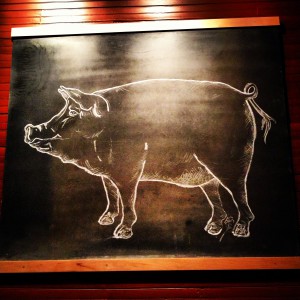 A simple menu at ProPig.

The Prohibition Pig (23 South Main Street) is in the space that was formerly the Alchemist (which was destroyed by a flood a couple of years ago), opening in March of 2012.  Affectionately nicknamed the ProPig, it’s a hell of a place. Their food focus is East Carolina BBQ, but it’s much more than that. Chopped hog, beef brisket, smoked chicken abound along with lots of small places and delicious vegetarian options as well. It’s a really nice and welcoming room, with a long bar and tall tables on one side, and a sit-down restaurant area on the other (same menu everywhere). It can get busy in the evenings, but you have the option of putting your name down on the dinner list, or camp out at the bar in search of a high-top.  Beer-wise it’s awesome. Due to its legacy, the ProPig is one of only two places (the other being renowned restaurant Hen of the Wood) that gets Heady Topper on tap. And it’s great as everyone says, now ranked #1 on BeerAdvocate’s list.  About 24 beers on tap, the ProPig also had offerings from locals Hill Farmstead, Lawson’s, Bobcat Cafe, and other Americans such as Jolly Pumpkin, Upright, Laurelwood and Hopworks.

Across the street is the Blackback Pub & Flyshop (1 Stowe Street), a unique spot comprised of three sides of a square that forms their bar, and that’s it. There’s only about 15 seats in total, which makes for a really intimate and fun place.  They have a killer beer list, having nine (!) Hill Farmstead on tap one night I was there, along with a couple of Lawson’s, Evil Twin, Amager and Jolly Pumpkin. They also have an outpost of the Mad Taco, a local taco chain, within the bar. From what I understand the bar used to be even smaller, having in the recent past added more seats and the kitchen. It still retains a very cozy feel and it’s easy to get into conversations with the other patrons at the bar, usually on the topic of fine ales.

Back across the street again is the Reservoir (1 South Main Street), a pub-front and pool table-back style bar, with 38 beers on tap, the most in town. Again, a very friendly place – we learned a lot about the local area from a bartender named Slim – with a great beer selection, including local favourites along with Anchor, Founders, North Coast, Mikkeller, Petrus, Victory and others.

If you plan on staying in Waterbury, the quaint, historic Old Stagecoach Inn is located right on Main Street, a 30 second walk to the pubs.  It’s a multi-room B&B, with a custom-cooked breakfast every morning.  The Old Stagecoach is nice spot, and the location cannot be beat for a comfortable bed after many delicious Vermont brews. 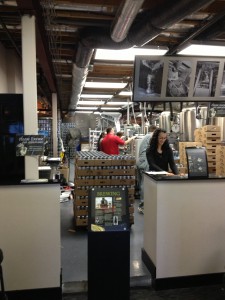 Canning away at the Alchemist.

Waterbury is still home to The Alchemist (35 Crossroad), but it’s only a brewery and cannery now. It’s open every day and you can stop in for a taste or a self-guided tour (which is really just a viewing area). Mondays and Thursdays are canning days, and you’d be best to stop in on those days if you hope to get some. As it’s such a renowned beer people come from far and wide to pick some up, and the cans usually don’t last longer than a day. We went at open on Thursday morning and easily picked up cans.

About 10 miles north of Waterbury is the town of Stowe, and the ski area is another 7 miles from there. Stowe’s got a couple of nice places, notably the Crop Bistro (1859 Mountain Road), which was formerly the Shed Brewpub. The Shed brands were purchased by Otter Creek and are still available in the area. Also in Stowe is a large, family-friendly pizza restaurant called Piecasso (1899 Mountain Road), with good food and a nice lineup of beers which included North Coast, Goose Island, Dogfish Head, Sixpoint, Ballast Point and others. 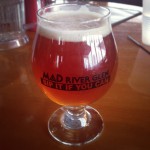 A challenge to sip Lawson’s Paradise.

Personally I’m a big skier, and Vermont is a wonderful place on to find some nice slopes to tide one over until apres-ski.  There are plenty of ski areas around, including Stowe, one of the largest in Vermont with a number of craft beer options available on-mountain. About 18 miles south of Waterbury are two other areas: Sugarbush and the uber-cool Mad River Glen. Mad River is co-operatively owned so retains a unique, old-school vibe and is one of the last ski areas with a single chairlift, which is very awesome. Their base pub is a cool spot, cozy and with a number of local beers including Lawson’s, in a custom-branded ‘Sip it if you can’ glass, playing off Mad River’s slogan.

About 12 miles east of Waterbury is Montpelier, the capital city of Vermont. Montpelier is unique as it bills itself as the nation’s smallest capital city, and I believe it. But as with other Vermont towns it’s very pretty with a few state buildings adding some more interestingness to the streetscape. 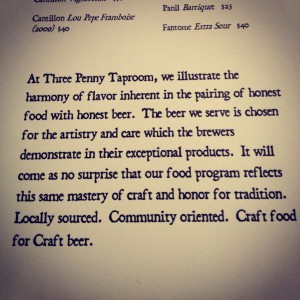 Montpelier is also home to another famous Vermont beer pub, the Three Penny Taproom (108 Main Street). The Three Penny, located right in the heart of downtown, is fantastic. The pub consists of a dining side on the left and a bar side on the right, well separated from each other. The dining area even had sound-absorption panels, presumably to retain a peacefulness regardless of what’s happening in the bar side (during the day it was very quiet). The Three Penny has a smallish but delicious menu of food, complemented with a robust 24-tap beer lineup including Hill Farmstead, Rodenbach, Ninkasi, Lawson’s, North Coast, Dupont, Ballast Point, Allagash and others.

Vermont proved to be a great destination to visit with a wonderful combination of skiing, beer, idillyic town scenes and a cozy and friendly atmosphere. It is such a unique place – very un-corporate, most certainly “authentic”, extremely friendly and relaxed, and with a true “farm-to-table” culture permeating its bars and restaurants. It’s a great place for beer but also for a real getaway from the general madness of Toronto’s metropolis. With Porter’s flights it is a snap to get there from the Island airport, or it’s about a 7.5 hour drive from Toronto. Highly recommended!