Categories: On The Road ReportsPublished On: March 22, 2014 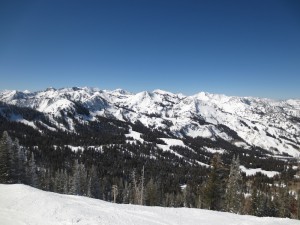 Just one of the many beautiful views from the mountains around Salt Lake City.

One wouldn’t think at first blush that Ontario and Utah have much in common. The state of Utah and the province Ontario are separated by 3,000 kilometres, but there is an unexpected connection. Both jurisdictions have interesting, if not downright bizarre, alcohol laws. As such, a visit to Utah is oddly familiar, as we are certainly used to strangeness when it comes to alcohol. But like Ontario, Utah brewers are doing everything they can to make great beer, and bar owners to create memorable spots to enjoy those tasty brews, despite their oppressive rules.

In Utah, the Department of Alcoholic Beverage Control is responsible for “regulating the sale of alcoholic beverages in a manner and at prices which reasonably satisfy the public demand and protect the public interest“. Sound familiar? In Ontario, the ACGO (having assumed the original LLBO mandate), is responsible for “regulating the sale, service and consumption of beverage alcohol…to promote moderation and responsible use”. Although Ontario does not have the Mormon heritage of abstinence which seems to have guided Utah’s laws, they are surprising similarities in core philosophy.

Some of the unique, archaic or just plain mind-boggling rules surrounding beer include: 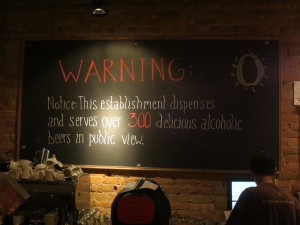 When visiting Utah it is certainly easy to sympathize with some of these rules, as Ontario has faced and continues to face some of our own odd teetotaling ones as well. That being said, not everyone in Utah is a Mormon, and many people in the state like to drink, and as a result Salt Lake City has some great breweries, brewpubs and bars that thrive despite the regulations.

Salt Lake City is Utah’s largest city and a skier or snowboarder’s dream destination with numerous mountains only minutes away, including Alta, Snowbird, Park City, Deer Valley, Solitude, Canyons and Brighton resorts. The city is laid out on a grid with large, wide streets running throughout and is easy to navigate, once you wrap your head around the street numbering system. There is a good transit systems of buses and LRTs, however they don’t run terribly late. Cabs exist, but they are not plentiful, so you’ll want to plan a route home late in the night (Uber or Hailo do not operate in Salt Lake, however there is an app called NexTaxi where we had decent success). The city center, home to the hotel district is also the main nightlife area, with numerous bars and brewpubs within walking distance of each other.

Downtown has two established brewpubs, the city’s first in Squatters on West Broadway and Red Rock just around the corner on South 200 West. Both are large and lively spaces, with bar and restaurant seating. Due to the 3.2% rules it’s common to find bottles alongside draught, so the breweries can offer a wide range of styles. Some bottled beers that are packaged in larger formats (e.g. 750ml) are available ‘by the glass’, seemingly in a way to slightly circumvent the rules and have a consistent serving size with draught. Squatters beers included a pilsner, hefeweizen, pale ale, amber on draught, along with the more interesting styles in bottle, including a winter ale, Belgian ale, IPA and saison. And at Red Rock, there were draught offerings which included a pilsner, black beer, white IPA, smoked porter and hefeweizen, plus bigger beers in bottle including saison, double IPA and a Russian imperial stout. It would have been nice if sampler trays were legal, but we were able to try numerous beers and they were all quite tasty.

Also downtown and near to the brewpubs are two top-notch beer bars. The Beerhive on South Main is a raucous spot, with a long bar and tables on the main floor, along with pool tables, foosball on the lower level, and a small sidewalk patio. The bar has a unique feature of a “frost line”, a perpetually frosted strip that runs the length of the bar where glasses are served and can be kept on. This seems to be a bit of a novelty, but does keep the last sip or two of your beer cold. The selection at the Beerhive is great, with beers from Bohemian, Desert Edge, Epic, Moab, Red Rock, Roosters, Squatters, Shades of Pale, Uinta and Wasatch on tap, along with a wide selection of bottles from Utah and elsewhere. 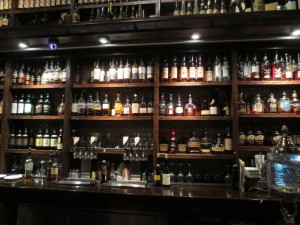 The impressive collection at Whiskey Street.

Whiskey Street, just down on South Main was absolutely booming when visited, packed to the gills and clearly one of the hotspots in town. I would describe the experience as “dining chaos”, as all seating, including tables, high tops and the bar is open seating, although there are table servers. It’s a huge, long room, probably three times the length of a usual downtown bar in Toronto. They have a beautiful, multi level back bar showcasing the whiskey selection, and it’s fantastic. Over 100 whiskes adorn the menu, including local brand High West and the fabled Pappy Van Winkle. And the beer menu is just as comprehensive, with 20+ draught including local beers Bohemian, Moab, Park City, Red Rock, Squatters, Uinta and Wasatch, and a substantial bottle menu.

About a 10 minute walk from Whiskey Street is another rowdy spot, The Bayou on South State. This unique Cajun themed restaurant also has one of the cities’ best beer selections, with 20+ draught featuring Uinta, Wasatch, Desert Edge, Moab, Red Rock (and more) and a huge book of 300 bottles from Utah and beyond, and even a firkin tapping on Fridays. The Bayou also dedicated some of its menu to tackle the 3.2 issue head-on, and discuss that beers can be of a high quality at this strength. At most of the bars visited it’s not generally promoted that draught beers are of a consistent alcohol percentage, so it was nice to see here.

One more brewpub, Desert Edge, is located in the outdoor mall Trolley Square on South 500 East. It’s a large, open space, with regular beers that include a pilsner, hefeweizen, pale ale and stout, along with some unique seasonals including a citra red and porter. There’s a large and impressive bookstore in the mall (Weller Book Works), along with various stores such as Whole Foods and Pottery Barn, so pints are easy to have alongside a shop.

One of Salt Lake’s more prolific brewers, Epic, has recently opened up The Annex in the Sugar House neighbourhood on East 2100 South. The modern designed room (complete with Zion Curtain) sells everything Epic has to offer, including some exclusive house draughts. All of their bottled beers are available by the glass, so it’s easy to try a wide range of brands. The Annex was a top-notch spot to visit (even though the bar couldn’t be seen) as Epic’s beers run the gamut of styles including some house-made draughts (stout, lager, saison & pale ale) alongside Epic’s Classic, Elevated and Exponential series. Highlights included the barrel-aged Brainless fruit beers flavoured with cherries, peaches and raspberries which were delicious. And the Epic brewery itself on South State (nearby the Bayou) is also worth a visit, where all their beers are available for sale, along with a “tapless taproom” with sandwiches and the bottles to accompany, open seven days a week. 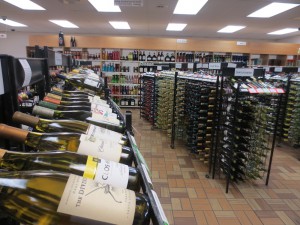 A visit to the state run liquor store on West 400 South was like a walk back in time. The generally dingy and unattractive store had row after row of wines on wire racks, reminiscent of the LCBO of days gone by. Beer and booze were displayed on wooden shelves and with cases stacked on the floor. Unfortunately whereas the LCBO has modernized their retail experience in recent years, the same cannot be said in Utah. This singular option that the state has for strong beer, wine and spirits is pretty sad.

Visiting most craft beer friendly states such as California, Michigan, Oregon, Illinois or Colorado provide drinkers with a wealth of options to drink, both at bars and in retail, from within the state lines and beyond. Visiting Utah, on the other hand, is reminiscent of Ontario: a fairly insular state where most of the craft beer is its own. But Utah has been in the midst of a craft brewing boom, with numerous local breweries pumping out great products despite the regulations. The craft beer scene in Utah was recently featured as a cover story in local publication Utah Stories under the headline “How Beer Saved Utah“. Let’s hope it continues to do so.

You could say that Ontario has a “spiritual” connection to Utah (there’s even a poutine truck in Salt Lake!) We’ve got a long way to go to make Ontario a free market for beer, and Utah even more so. But visiting Salt Lake is a lot of fun, with lively bars and an ever increasing selection of local and well-made craft beer. If you are a skier or snowboarder Salt Lake should be near the top of your wish-list, with some of the best and easiest access to world class snow you’ll find – and even more so if the recently-announced One Wasatch project comes to fruition. And for beer drinkers, Salt Lake City offers an ever-increasing array of options, as enthusiastic brewers and the forces of modern times continue to elevate the state’s quality beer scene.