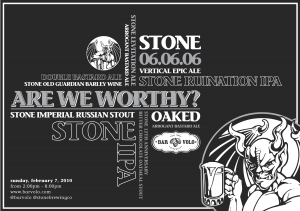 barVolo would like to announce the first ever availability of Stone Brewing Co. Beers in Ontario! Based out of Escondido, California Founders Greg Koch and Steve Wagner have built Stone Brewing Co. into one of the top rated, most recognized breweries in the World! Join BarVolo on Sunday February 7th, for an afternoon of worthiness. Is Ontario Worthy?