Categories: On The Road ReportsPublished On: May 31, 2014

The Bar Towel is proud to present our inaugural preview of the American Homebrewers Association (AHA) National Homebrewers Conference, taking place from June 12th to 14th in Grand Rapids, Michigan. This article will cover highlights of the conference as well as some beer and cultural destinations in the city of Grand Rapids.

Grand Rapids has over the past few years emerged as one of the premier beer cities in the United States.  And due to its close proximity (about a 6 hour drive from Toronto), it is one of the most accessible craft beer destinations for beer lovers in Toronto and western Ontario.  Grand Rapids, the second largest city in Michigan, is an attractive place to visit with a walkable, safe and clean downtown core, featuring many preserved historic buildings.  Located near the eastern shores of Lake Michigan, the city itself is inland, with the Grand River running right through the heart of town.  Grand Rapids offers a number of hotels right in downtown, making it easy to stay close to the action of its thriving beer scene.

It’s no little wonder then, that Grand Rapids plays host this year to the American Homebrewers Association’s National Homebrewers Conference, the largest conference dedicated to amateur brewing in the world.  The conference, subtitled “Mashing in Michigan”, is organized by the American Homebrewers Association, the group (through the Brewers Association) also responsible for the Craft Brewers Conference, held annually for professional brewers.  The homebrewers conference, which was founded in 1979, is taking place this year at DeVos Place, right in the heart of downtown Grand Rapids.  The conference has experienced phenomenal growth in the last decade, growing from 261 attendees in 2001 to an attendance of 3,400 last year in Philadelphia.  That’s a lot of beards.

Let’s talk about the conference itself to start.  Similar to the CBC, the format of the conference is seminar-based, with lectures, panels and discussions throughout the day, beginning at 2pm on Thursday, June 12th.  Topics are wide-ranging and look to appeal to novice and experienced homebrewers alike.  Speakers include a wide range of experts including homebrewers, professional brewers, brewery managers and owners, brewery guild representatives, authors and more.  And the seminars promise substantial learning and conversation opportunities, with topics ranging from beer aging, beer ingredients, brewing equipment, brewing science and specialty brewing including sours, ciders, mead and sake.  It seems like a sure-fire guarantee that homebrewers will go home with more knowledge than when they arrived. 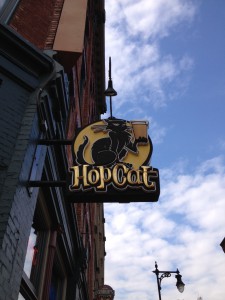 As with the CBC, there are numerous offshoot beer events taking place in and around the conference.  Two of the highlights will certainly be Club Night, where homebrewers showcase their beers to fellow homebrewers, and the Grand Banquet, is a sit-down dinner where the winners of the AHA homebrew competition are announced.  And around Grand Rapids, numerous bars and breweries will be hosting special events, including tap takeovers, brewery tours and other talks and sessions.  There will be plenty of delicious beery things to keep thirsty homebrewers occupied throughout the conference.

Like the CBC, part of what makes attending a conference like this worthwhile is exploring the host city.  And Grand Rapids will not disappoint your beer taste buds.  The Grand Rapids area is home to a double-digit number of breweries, with many fellow Michigan and out-of-state beers readily available around the city.  And fortunately for everyone coming into Grand Rapids for the conference, many of the local breweries and craft beer spots are easily accessible from the downtown core and DeVos Place.  Let’s look at some of the can’t-miss places to check out.

It would be hard to be a beer fan in North America and not know about HopCat.  This is truly one of the top beer bars you’ll find, a lively spot with an incredible lineup of beer, alongside some of their own house brews as well.  It’s an attractive, raucous place that will no doubt be one of the hot spots during the weekend.  Get there early, hold on to your seat (if you get one), and don’t forget to try the Crack Fries and a Grand Royale.  (Of note is HopCat’s second location in East Lansing, which is on the way to Grand Rapids if you want to make a quick stop en route.  There’s actually a lot of great beer things that you could stop at on the way to Grand Rapids, but that’s for another article.) 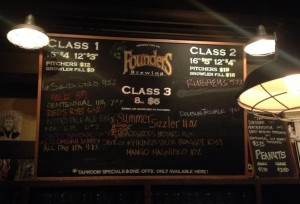 Something you’ll get familiar with: the Founders draught board.

Michigan’s beer scene is one of the the best in the U.S. (ranked #5 by number of breweries), and Founders Brewing is one of its shining stars, located right in downtown Grand Rapids.  Visiting Founders is a destination unto itself, as the newly renovated facility is comprised of their brewery, a large taproom (often with live music), a private event space and outdoor patio.  From my experience it’s busy all the time, so be prepared to lineup to get in during AHA weekend.  But it’s worth it, as the pub has a whole mess of Founders on tap and a take-away deli counter to boot.  A must-visit while in Grand Rapids.

Just a bit out of downtown (accessible via cab or transit on the #6 bus is Brewery Vivant.  Built into an old funeral home and chapel, Vivant is a brewery inspired by “the small breweries that dot the countryside in Southern Belgium and Northern France”, as they put it.  Vivant’s brewery also features a taproom and restaurant, with about 10 of their beers available on draught and a full food menu.  Definitely worth stopping in here.

Both Pyramid Scheme and Meanwhile deliver on the ever-satisfying pinball and craft beer combo, with Pyramid being quite close to HopCat and Meanwhile near Vivant.  Good places to check out on their own, but especially if HopCat and Vivant get a bit too full of homebrewers during the weekend.

For a totally different twist to your Grand Rapids beer tour, you should also drop in to Mojo’s Piano Bar.  This spot features the incredibly unique and fun experience of live duelling pianos.  And with $3 glasses of Bell’s to complement, this is something you won’t want to miss.

At the beginning of May of this year, Grand Rapids welcomed Elk Brewing, a new brewery reportedly three years in the making.  Elk has about 5 house beers on tap (no food available) and a beer garden planned to open soon.  Looks promising and undoubtedly many curious homebrewers will be having a taste.

Grand Rapids itself is also home to a few more breweries, including the baseball-themed brewery and pizzeria Mitten, B.O.B.’s Brewery, located in the multi-faceted restaurant complex B.O.B. (Big Old Building), Schmohz, Harmony Brewing, Hideout Brewing and Perrin Brewing (in Comstock Park).  There are even more breweries if you’re interested to travel a bit further afield, so download this handy beer map, updated as of April 2014.

If you get beered out during the conference, there are plenty of other interesting sights to check out.  Grand Rapids is the hometown of former President Gerald Ford, so there’s a Presidential Museum, located right across from the Holiday Inn downtown.  Ford took over the presidency in the wake of the Watergate scandal, so there’s some juicy history in there to learn about.  There’s also the Grand Rapids Art Museum (a special Michigan industrial design and architecture exhibition just started) and if you like Frank Lloyd Wright as I do, go see the Meyer May House.  Some fresh air is always a good thing during a beer conference, so the Meijer Gardens and Sculpture Park will do the trick.  So when you need a brew break, go get some culture in as you get ready for the next imperial IPA.

The AHA National Homebrewers Conference begins at 2pm on Thursday, June 12th.  Registration remains open, but downtown hotels appear to be sold out.  If you can find a place to stay the conference and Grand Rapids itself will not disappoint.  And if you can’t make it for the conference, plan a weekend trip to Grand Rapids anyway.  It’s truly a fun city with great beer to boot.  We’re fortunate to have them only a few hours away.

Please see below for a map of some of the spots referenced in this article:

Some notes and recommendations for Grand Rapids have been collected from The Bar Towel forum community.  Thanks guys!