The following article was written by Gary M. Gillman, a long-time beer fan and practitioner of business law in Toronto.

As one of the older members of the esteemed beer Discussion Forum on bartowel.com, I have had the chance to survey the beer scene for a long time.

Knowing of my relative longevity, Cass Enright, developer and owner of the bartowel.com website, kindly suggested I set down some thoughts on how the beer scene has changed since I started to drink the malt.

I was born in Montreal and lived there until 1983 whence I moved to Toronto where I live today.

My first taste of beer is a distinct memory. I was 12 or 13, in my grandmother’s flat on Esplanade Street in Montreal, a handsome old triplex. We were in the kitchen – this is the 1960’s – and I remember being given a sip of beer, it was probably a Molson Export or Dow Ale. To me at the time the taste seemed huge, bitter and roiling in the mouth, a bit like root beer but not really. I had a few more sips in the Laurentian Mountains during summers as an older teenager, either at the adults’ bonfire parties or occasionally in local taverns where the proprietors would sometimes look the other way for the age requirement. All these early occasions were similar in that I didn’t really like the taste.

Finally, in university from ’68-’74, I had the chance to try a range of beers, all domestic initially, and acquired the taste. Generally I liked Export Ale, Labatt 50, Laurentide Ale. With O’Keefe Ale, these were the main types available in Quebec at that time. Molson Canadian, a lager, was available but few drank it in Montreal at the time, same thing for Labatt Blue Pilsener. Before I knew anything about beer, I had a distinct preference for ale, i.e., top-fermented beer. When Carlsberg was first introduced to the market in about 1972, the taste struck me as quite different both because of the European heritage and the softer, lager flavour. The ale group didn’t taste all the same. O’Keefe was softer, Export earthy and firm, 50 aromatic, Laurentide kind of fruity. When Guinness Stout was first made under license in Montreal, I tried that and the odd porter you could still buy in the grocery stores such as Champlain Porter. The taste was quite different, burnt, soy- like or licorice, and I liked it once in a while.

The draft beer in taverns was just “draft”, no one cared or asked about the type or source. Some men ordered bottled beer “tablette”, meaning not chilled, which I found odd but it wasn’t uncommon especially in the long winters there. Some added salt to the beer, which magically raised the head.

My first taste of beer not made in Canada was probably not one of the few imports available at the Société des Alcools (Quebec Liquor Board) but in U.S. bars in border towns such as Plattsburgh, NY. My friends and I would drive down sometimes to have a drink and listen to live bands. I tried the American beers, brands such as Schaefer, Pabst Blue Ribbon, Genessee, Piels, Matt’s Premium, Budweiser, and immediately liked these. Not so much because they were each unique but because of the general difference in flavour to the Canadian ales. They were lighter, and seemed less alcoholic (which later I found was true but only by a smidgeon). I started to buy a six-pack of this or that in the local stores and brought them back. Sometimes on the weekend with friends we would try and compare. At some point, I must have added one of the SAQ imports, probably Tuborg (which was sweetish and aromatic and much better than today) or Pilsner Urquell or McEwan Scotch Ale. The McEwan Scotch Ale recently re-introduced to the Ontario market is quite similar to that mid-1970’s Scotch Ale.

I remember also drinking Chimay in Old Montreal in 1980 and finding it very different, sweetish and candy-like – better then than now, in my opinion.

Probably the key turning point in my beer history was buying my first beer book. It was All About Beer by John Porter (good name eh?). I still have it. This was in 1975, so a few years before Michael Jackson’s first book came out. Porter had started as a brewer’s apprentice in New York City in the late 1930’s. He gave a good overview of where beer came from to where it was – fairly undifferentiated American adjunct lager – by the mid-70’s.

I learned the essentials from Porter’s book and after that looked more intensively for different beers especially on those U.S. trips. The U.S. always had a good range of imports and I started to buy those, I remember liking Wurzburger from Germany, La Belle Strasbourgeoise from eastern France, British ales such as Ruddles and Theakston’s, and the odd Belgian beer. Both because of cost and probably the freshness factor, I continued to buy a wide range of American beers.

In this period, while it is true that nothing compared to the richness of the current craft scene, the American beers, as ours, did not taste quite alike. Each had a particular flavour and also, there were “super-premiums” like Erlanger, Andeker, Michelob; we had Brador in Canada. These were half way between a standard North American adjunct beer and an all-malt or high-malt European lager or ale. There were also “darks”, beers in the original Munich style but lightened a lot and probably coloured often with caramel, as well as seasonal bock beers. They had a touch more taste than the regular run but not by much.

I kept buying beer books, Michael Weiner’s 1977 The Taster’s Guide To Beer, Jim Robertson’s 1978 The Connoisseur’s Guide To Beer, other smaller books including funny English ones which spoke, puzzlingly, of “real ale”, and finally Michael Jackson’s landmark The World Guide To Beer in 1978 or ’79.

Because I had sampled the beers from Anchor Brewing, which were much better than the reputed Coors when it finally reached the (U.S.) east coast, and because I had the chance to drink some good imports and the super-premiums, I did have an inkling of what real beer was like. Just as an example, Tooth’s Sheaf Stout from Australia was – is I’m sure – full-flavoured, quite similar to craft stouts of today. Therefore, when the first craft beers became available, I searched them out with avidity but kind of knew what to expect. (I had never home-brewed or knew anyone who did).

Unfortunately, I could never find the beers from New Albion Brewing Company in California, the first true modern craft brewery (1976-1984). But I remember around 1981-’82 finding beers from Boulder Brewing and Sierra Nevada Brewing Company, and the special releases from Anchor Brewing which became the basis for its Liberty Ale. I thought these were wonderful and together with having the chance to try an increasing range of imports (still in the U.S., the choice here was very small), I feel I was able to scope the full beer palate fairly early on.

The first craft beer in Quebec was made by a brewpub in Lennoxville and perhaps ironically I never had a chance to taste it. I was busy with work in Montreal and then the move to Toronto in 1983. I believe the pub is called Golden Lion and is still going strong. But moving to Toronto opened up new vistas. The centres in New York State near southern Ontario offered a large import range so my palate was continually being exposed to good imports and to the developing brewpubs there. Even then I tried to be careful about date codes to ensure good quality but often there were disappointments. In general, imported beer is more reliable today.

Upper Canada Brewing and Creemore Brewery opened in the later 1980’s and I supported their beers ardently although the taste wasn’t quite what I liked. I liked traditional top-fermented English beer, this was honed as well by regular trips to England starting in the mid-1980’s. I finally got what real ale was all about but could see the connection clearly, too, to unpasteurized North American craft beers. Sometimes Upper Canada would offer a wood keg of real ale though, I remember drinking it sometimes at the old Allen’s downtown (relocated for some decades now to the Danforth), and at Babbage’s in the Beaches. John Maxwell of Allen’s, a beer stalwart then and now, helped found the Toronto Gambrinus Society which organized various trips to breweries, I recall one bus trip to Creemore and meeting John Wiggins, one of its principals, who had an ad agency background.

I met Michael Jackson on his second trip to this area in about 1985 and helped him organize future visits including to Granite Brewpub and Allen’s where he spoke. I also organized a trip to Sleeman Brewery for Jackson. Even then I could see its beers occupied a mid-range in the craft beer palate (of course appreciated by many then and now). 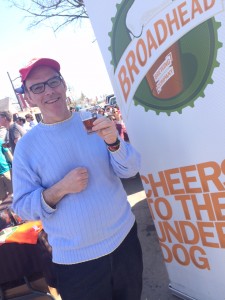 Really the story since the end of the 1980’s is just bigger and better. As the best of the old commercial beers died away, e.g. Molson Porter and Labatt IPA, an increasing number of craft breweries took root in Ontario making beers of character in a range of styles – nothing to what we have today but making good solid tasty beer with a natural taste. The proliferation of Toronto brewpubs or craft bars – C’est What, the Rotterdam, the Amsterdam – helped spread the word. So did the English pub phenomenon, e.g., Wellington Brewery’s beers were available early on in some of these. The ubiquitous IPA of today has its roots in Bert Grant’s IPA made out in Washington State in the early 1990’s. But really that was a continuation of the Liberty Ale and American Pale Ale styles albeit amped up somewhat. It’s all been a steady stream of development, very organic.

A salutary change from 25 years ago is that quite a few brewpubs back then relied on malt extract to make their beers. This is pretty much a thing of the past.

The major difference I’d say since 1990 is not so much the palate range – this is more on the level of detail than anything else – but the public perception of beer. Today, the average person is much more amenable to trying a beer with a genuine taste, one which recalls how beer was made and tasted in the 1800’s. Craft beer isn’t regarded as the oddity it was and of course large brewers are getting into the game with their own brands as well as those purchased from craft brewery pioneers.

It’s all good, and a part of tradition has been restored. It took a lot longer than I thought, but the future of good beer is now assured.